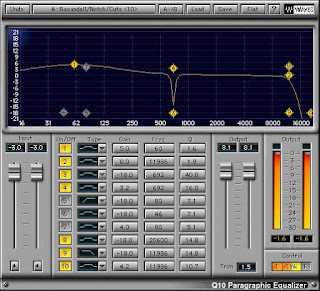 Anyone who has ever increased or decreased the Low, Mid, or High on their home/car stereo to find a tone more pleasing to the ear has used EQ to shape sound. The entire realm of tone and sound involve a spectrum that runs from 20hz to 20khz. Every sound attainable by the human ear is represented here, and even a few it can’t. EQ is a major part of why XONE sounds like it does.

I’m sitting here now, mixing down the new version of “Beautiful One Day” that’s going to be on our second CD. The tempo is faster and the parts are more precise. Using Parametric EQ is how I’m going to get a 12 drum mic setup, Bass, and multiple tracks of guitar and Vocals to sit together nicely in sonic space. Now, I am no EQ wizard. But I do know this, Cut not boost, and if you boost, boost small and tight. I’m really learning a lot from working on this new CD, like I did working on our debut CD last summer.

EQ was already a big part of XONE’s overall band sound. Ted and I have always EQ’d our Line 6 Bass POD Pro XT and Vetta 2HD patches to work together sonically. When we make patches or a song, we make them at the same time, so we both cut thru: Ted on the Low End, me on the Highs, sharing the middle zone. Our Line 6 devices really allow us to dial in an exact blending of our tones to compliment each other. Ted, in particular, has an ear for EQ, so we rely on his expertise to finalize the process. He’s even tweaked parametric EQ on some of my Vetta patches, like Greed’s Rhythm patch. I use less Lows and Low Mids, and leave those for Ted to sound full and rich on Bass, not just thumpy. We want articulation in the Bass. In turn, I boost my Mids and Highs for my fullness and body, and so I cut thru. It’s a real finite process, as boosting any signal creates more noise as a side effect. Most of this live tone EQ-ing is done with the tone knobs on our Line 6 devices, and not much Parametric or Graphic EQ is used. These tones are recorded direct and then lightly EQ-ed in mixdown to give them more of their live sound.

On the new CD, I’m using the Waves Q-10 Parametric EQ per track, and it is awesome. We also really like the 7-band EQ in Jason’s Pro Tools! With every instrument challenging for sonic space, EQ is essential to give each one its own place in the mix. And that’s the EQ XONE… 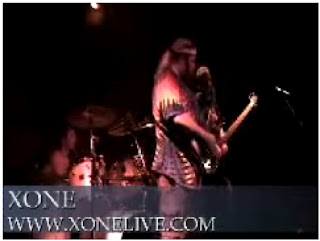 Getting a quick, good, live video of your band for the Internet can be an easy thing to accomplish. All you need is a Mini-DV camera, someone to run it at your show, and a simple computer program like imovie (Mac), and you can easily create a video of a live song for your website.
Here's our new LIVE video from The Lighthouse on April 10, 2007.

XONE has been doing live videos for years. We try to take video of every live show we play, that way we can study our performance afterward, and as well get fodder for our website. Now there are 2 types of live video a band can get. One is just a standard recording that records the audio through the camera's mini microphone. Or you can record video with the camera (or multiple cameras), and record audio with a portable recording system. XONE has done both for years.

Admittedly, recording quality audio with a portable recording system requires a lot of setup time, and with most Los Angeles clubs giving you 10 minutes to setup, setting up a separate recording rig takes too much time. In those particular situations, we usually just take video and allow the mini-mic on the camera to capture the audio. It doesn't sound like a million bucks, but it does the job.

Our latest live video is a product of exactly this method. Our friend Jessie was the videographer at our last show at The Lighthouse, and he took excellent video that shows all three XONE members, all the time for the whole show. I cut the two best-performed songs from the tape and used imovie to add fade in/out and text: Song Title, Band, Location, Date, and Website URL. It's easily accomplished in about two hours, and bam! you've got new live video of your band on your website!

Here's the link to our new live video for Triangle

Here's the link to our live video of TKO 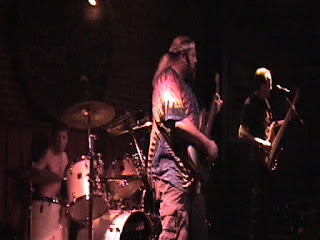 Last night, XONE delivered a blistering set of Progressive Metal to the awesome crowd at The Lighthouse in Hermosa Beach, California! We played a 41-minute set, in what was an excellent return to playing live for the band. The in-house crowd at The Lighthouse gave us a loud response after every song and we really felt like our music psyched some people up!!!

It was XONE's first show back after a year of not playing live. It feels really great to get back on this horse. We were playing live regularly in 2004-2005, but a drummer search and recording took precedent in 2006. Now in 2007, we are back with a new CD in hand and two more in the works. We've got an awesome new drummer in Jason Seger, and playing live is a great release for all the hard work we've put in at our rehearsal room at KOOS, preparing for our next CD.

We were lucky to have our friend Jessie along to act as drum/gear roadie and videographer. Initially, the club wasn't going to allow Jessie in due to an expired driver's license, but Will, the excellent head of security at the Lighthouse, saved us by allowing Jessie inside.
YOU RULE, Will!!!!!!

The soundman, Ray, accommodated our every need, and he made us sound great after a few initial problems with the feed from my VoiceLive Vocal Effects pedal. I'm still getting the kinks out with that thing. Thanks again, Ray, you made us sound great!!!
Also, the management down there is great! CJ, the manager, took great care of us last night and we are very excited to return and deliver an even better performance worthy of such awesome hospitality. If you haven't been to The Lighthouse, it is a South Bay/Beach Cities institution. That place totally rocks!! It has an excellent vibe, and for bands, they offer easy access to the stage with your gear through the back door. The Lighthouse rules, and we'll be counting the days until we return!

In the meantime, we are pushing forward to our next live XONE show, the Battle of the Bands on Monday May 14 at 7:30pm at the Rhythmn Lounge In Long Beach, California...

Why XONE appreciates the musicianship of John Myung 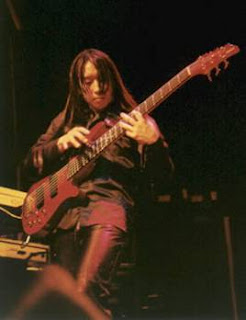 Back in 2004, XONE was looking for a bassist. Most wanted ads for musicians are a couple of lines and typically pretty vague. The ad for a band named XONE was highly specific and lasted several paragraphs (which I won’t bore you with), but what stood out from many other bands listing metal and progressive influences (o.k. so there weren’t many) was that it cited a little known bassist at the time John Myung. Numerous bassists tried out for XONE and many of them came in stating that they listened to Geddy Lee or Steve Harris, but only one, the current bassist, understood and was attracted to Myung’s understated but unique style. So what is the special connection that XONE has with the musicianship of John Myung?

It was actually stated in the original ad, “We’re looking for a melodic bassist…” And that’s really the core of what makes John Myung’s playing memorable. For those of you not familiar with John Myung, he is the long-time bassist for Dream Theater, a progressive fusion band that mixes rock, metal, and jazz with progressive elements.

John’s role has been to bring a classically trained background into the realm of progressive metal bass playing. What this means is that the bass is utilized for more than just root notes (which is the typical rock style), rather it focuses on counterpoint melodies that are a close cousin to the rhythmic or melodic lead often played by certain guitarists including John Petrucci. Myung’s style is often understated and can be overshadowed a bit in such a musically strong and at times overwhelmingly shredding Dream Theater. However, it is very clear that Myung is more than just the glue for the band, and he has the ability to express clear musical intension and passion which is most eloquently shown on his 6 string bass in songs like Metropolis Part II or on the Chapman stick in songs such as Take Away My Pain.

XONE songs that express elements of Myung’s influence on the band include portions of Mastermind, Change in Time, 4th Dimension and others. Also, Myung’s intensive work ethic (often practicing 8 or more hours every day) influences us to work harder and push to improve our sound with every rehearsal we do.

Posted by Lord Tedders at 9:08 AM No comments: 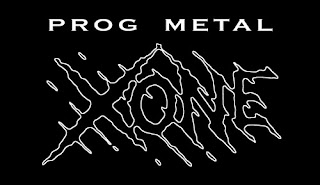 The Lighthouse is a Beach Cities institution!!! We are psyched to play here!! We know it's late, but we'll be jamming out our original tunes anyway!!! Come if you can...