XONE in Beats Per Minute Maps 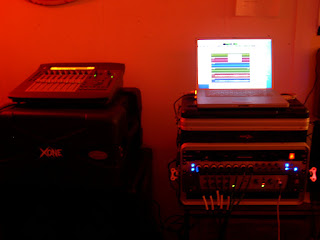 Last January, I wrote a blog about how XONE’s music couldn’t be fit into nice, tight Beat Per Minute (BPM) maps. I wasn’t the only one who was convinced that trying to make complex BPM maps for each XONE song was not working. After about 8 months of trying, we completely let go of the idea of using a Dell laptop with 512MB of RAM to tap BPMs into Sonar 4 PE and make BPM maps.

Then, while I was on vacation in Florida in July, I bought a Guitar One magazine to read while I was lounging on a beautiful white sand beach. It was a special Prog Rock issue, that featured an article on John Petrucci. Petrucci is undoubtedly one of my favorite guitarists ever, so I couldn’t wait to read his interview. I was completely stunned, but also, totally invigorated to read this quote:

“…most of our listeners don’t realize this…when we’re recording, we need tempo and arrangement references at all times, because the songs are long and they constantly shift tempos and time signatures. So once a song is written, there’s this whole process of writing a click track (on our DAW), where we go through and map out every time signature, bar, tempo change, feel change, whether the accent within the click track changes…The click track can sometimes take a couple of days. But the good thing about it, is that once we’ve finished that and have it locked in, we’ve got a map of the song. And that’s a very important part of making the songs come out tight…” John Petrucci (Guitar One-June 2007 Issue)

This single paragraph got me to start
rethinking the idea of making BPM maps.
Luckily, Jason and I were now using Pro Tools in a Mac with 2GB of RAM, and that seemed to be the difference. We are now making BPM maps for every song on our third CD, and it is working like a charm!! It has completely freed all of us from any questions regarding correct tempo in any particular section of our songs. I have been laying down scratch guitar to the BPM maps so that Ted can practice and record his parts up in Portland.

So, basically, I’m saying what I wrote in January 2007 is WRONG,
and what John Petrucci was quoted as saying in June is CORRECT!
I am not fool enough to think I am more experienced than JP!
I knew as soon as I read the paragraph that we had to get back to it.
I am so glad that we did, as recording this third CD will be a lot of fun as a result,
And a way tighter album than we’ve ever produced before. 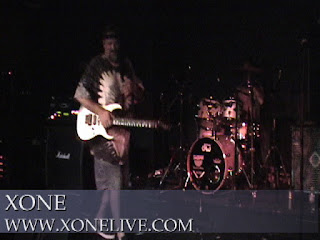 Following a successful 2-man performance by XONE at La Conga in September, we’ve decided to post a video of one our songs from that night.

Three songs into our show, we inserted a Free Jam that we basically played out of nowhere, in the moment. Since we were just guitar and drums that night, Jason and I decided to keep the guitar parts simple and let the drums carry the tune.

I (Will) used the Jam to show off some of the cool features of my Line 6 Vetta HD Amplifier (Ver 2.50). I use all custom Vetta patches made by me for my particular setup/rig. NO Factory Patches Allowed!!!

Jason, of course, did his usual job of pumping out the excellent driving and accented beats, that he produces at will…well not directly at me…on the club’s house kit, which doesn’t sound as sweet as Jason’s own Yamaha kit!
But you can bang ‘em like crazy!

We had a lot of fun playing for everyone that night, especially Shaun Luera, from Sifa, who stood up at the stage during our flagrant exercise in creating a wall of sound!! Anyway, Here’s the video posted at You Tube: