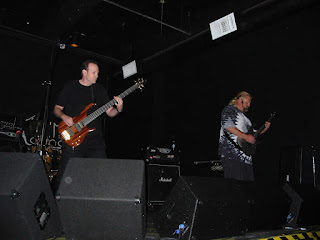 Longtime XONE Bassist Ted Heming has moved to Portland, Oregon to pursue his fortune with his new catering business! Does this mean the end of XONE? Not in the age of technology!!

We’ve had a lot of fun over the last 4 years playing together as XONE, playing at the Blue Mule, KOOS, and the numerous venues we’ve played together. The most fun, though, was the creative process we undertook to write original songs together back at the Blue Mule. I personally will never forget those days when we were the “richest men in the whole world”, writing songs, and playing loud twice a week, without fail. Ted is the best music partner and friend that anyone could have. It hurts to lose him, but I have hope that we will continue to make new music from across the great divide. Thanks to the Internet, computers, and specialized software/hardware, Ted and I can continue XONE as a long distance project.

Luckily, Ted’s departure does not mean an end to XONE. In fact, both our second and third CDs will be mixed, mastered, and distributed. It’s just that now, the third CD will be recorded long distance with the help of modern technology. Ted knows all of his bass lines like the back of his hand, so it is merely a matter of tracking his parts. I (Will), and Jason will track our parts first and then send a stereo recording of both instruments to Ted. Ted will then record his Bass parts direct into Cakewalk and then send his mono tracks to me over the Internet. We may have lost the live aspect of our music partnership, but we haven’t lost the recording arena.

We hope you’ll stay tuned for our best music yet to come!!
Thanks,
Will and Ted
XONE

You can stay connected to the future of XONE by reading our BLOG at:
http://www.xonelive.com

Our second CD “The 4th Dimension” is currently being mixed and mastered.
It will be our biggest musical venture to date,
and guaranteed to blow your mind!!!