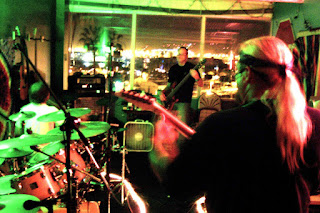 We’ve been rehearsing for a Summer 2009 local San Pedro live show and we’re excited about showing off some new additions to XONE, one of which is Jason’s new Roland TD-6 V-Kit Virtual Drum Kit. Though, we were all skeptical at first that the V-Kit would sound “fake”, ultimately, we were all blown away by its amazing ability to not only sound natural but also carry the low end! The V-Kit Rules!!

With the use of Pro Tools and the fact that each XONE song has its own Click Track Map, Will and Jason can practice in San Pedro, and Ted can practice in Rocklin to the same song. When we get together every 2 months for weekend rehearsals, we sound like we’ve been practicing twice a week in the same room. All of this for a show we will be playing the Summer 2009!

And for the first time, we will be playing with the Roland V-Kit! It sounds better than the acoustic kit, and Jason’s Yamaha kit sounds great! The V-Kit has so many excellent simulated full drum kits, that time is needed to investigate its instruments. Jason has definitely put this V-Kit through its paces, as we’ve been rehearsing with it exclusively since January! We love how hard it hits and how well it cuts thru. Also, it has helped to lower our overall live volume level to a much more comfortable listening level for our fans ears.

Are you skeptical? We were at first too! Come out and see us this Summer 2009, and see what you think of the new Roland V-Kit. In the meantime, here’s a video clip of the second half of our song HERO from our January XONE rehearsal together. Let us know what you think!