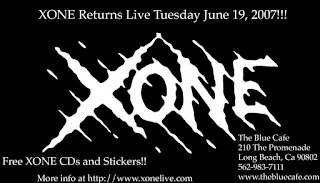 HELLO FRIENDS OF XONE!!!!!!
Come down to the Blue Cafe and see us play on June 19, and pick up our debut XONE CD and XONE sticker for FREE.
Guaranteed to make you feel good inside!


Also, we're working diligently to mix and master our upcoming, second CD,
and we’ve into pre-production on our third.
We're looking forward to releasing a total of three CDs in 2007!

Once again, Amy from Glass Kitten Productions has booked us in an awesome venue, and we're psyched to play somewhere new and with Amy again!
So come on out and see us LIVE at The Blue Cafe, Tuesday June 19th!
Come see all the bands as the place will be Rockin' Hard!!!
...A New Era In Progressive Metal...
Show starts at 9:00pm
XONE goes on at 10pm

Directions:
http://www.thebluecafe.com/directions.htm
Right off the 710 South Long Beach Freeway. Exit Broadway and The Blue Cafe is located one block past Pine Ave on the left hand side on the city Promenade, half a block from Pine Avenue Restaurant Row. 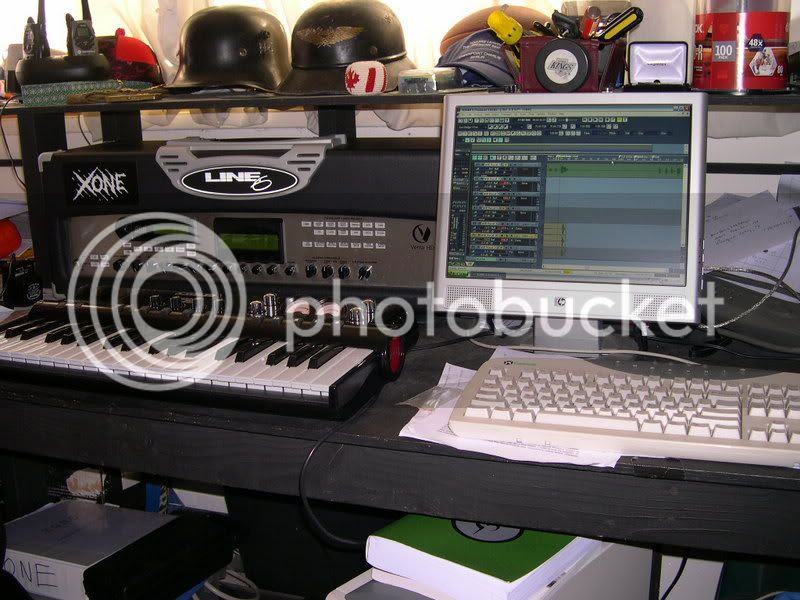 XONE is currently mixing and mastering their second CD of original Progressive music. The album was tracked from November 2006 to January 2007 at a local recording studio. Will, Ted, and drummer Gino DiLeva tracked the album, with the drums being completed on five songs in a single day. The performances are excellent, and we took the tracks we recorded home to mix on Cakewalk Sonar. Unfortunately, the Bass tracks are decidedly un-useable.


The mix down process has been slow, due to my (Will’s) final college semester, so the work began in earnest after I handed in my final history paper last week. Sunday, Ted and I set to mixing the new CD together. I had mentioned to Ted that we might re-track some bass if need be, and he quickly agreed that the bass tracks were way messed up. The studio had insisted on tracking the Bass both Direct and with a Mic. The Line 6 Bass POD XT Pro is set up be utilized for either Direct or Miked, but NOT both at the same time. Unfortunately, I did not speak up and insist that we ONLY record the Bass POD XT Pro DIRECT. It would have saved me and especially Ted, a great deal of work.

Needless to say, we had to re-track the bass parts for the CD. So using my new Line 6 Toneport KB37 with Bass model packs installed, Ted re-tracked his Bass parts yesterday utilizing patches in Line 6 Gearbox we created from the versions on his Line 6 Bass POD. The results were excellent! The tracks are clean and easily sound better with Waves plug-ins. Even though it took a whole day of tracking to complete, the tracks have made a huge difference in the overall sound of this next XONE CD.
Stay tuned for it’s release this Summer 2007!!! 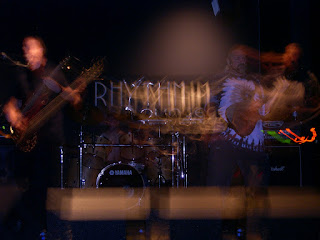 We want to thank everyone who came out to see us last night at the Rhythm Lounge in Long Beach!!! We couldn’t have done it without you!!!
Jen, John, Mike, Jeremy, Jai, Don, Jessie…
You guys totally rule!!!

We’re still working on mixing and mastering of our 2nd CD,
and we’re lining up shows for this summer.
So come on out and see us,
and get our Debut CD FREE!!!!
Plus free XONE stickers to plaster your favorite band everywhere!!!

Stay Tuned for more XONE action
by checking out our XONE BLOG at: http://www.xonelive.com 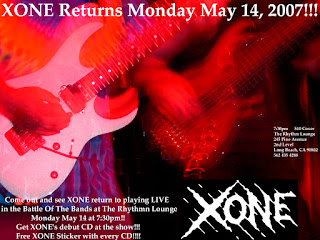 Come out and see XONE play live in the Battle of the Bands at the Rhythm Lounge in Long Beach, California for a blistering set of Progressive Metal!!! We'll be giving out FREE XONE debut CDs with new XONE stickers!
Monday May 14, 2007 at 7:30pm...


Well, it's been a really long time since we've played LIVE for you guys.
We've searched for a new drummer,
and after a tuneup show,
it's time to release our debut CD!!!
Come down and see us in the Battle of the Bands,
and pick up our first XONE CD for FREE.
Free XONE Sticker with each CD!!!!
Guaranteed to make you feel good inside!!
It will also be the official debut of new drummer Jason Seger
with XONE!!!! 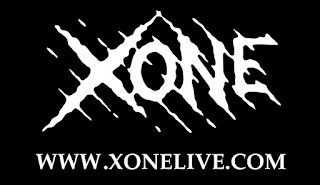 One of the most FUN things about being a band is getting stickers made up for your fans to proudly display their favorite band. They can go anywhere and if you’ve got a cool Logo, then you’re going to find all kinds of places to stick them, cop cars not included. We recently ordered our second set of stickers, and we’re excited to hand them out at our next show!

XONE was very excited when our friend, Director/Artist John Lechago, presented us with our new XONE Logo back in 2005. John drew the logo from his innate knowledge of XONE and it’s music. It helps that he’s one of our biggest fans from the beginning.
The logo was perfect, as it didn’t label us as one type of music or another, which is exactly what we are. We take many left/right turns in our music, and the logo captured our fluidity.

We had stickers made up for our Summer 2005 shows. When we first got them, Ted and I went crazy sticking them all over everything, our guitar cases, speaker cabinets, even my Vetta HD. We had them made by Contagious Graphics and they did a great job putting our Logo on black and white sticker. We handed those stickers out all summer until they were gone.

Jump now to 2007, and now that we’re ready to play live again, we thought we ought to get a new batch of stickers made. This time we added our URL to it so that folks could find our website from the backs of cars, etc…
We can’t wait to give these stickers to our fans!!! 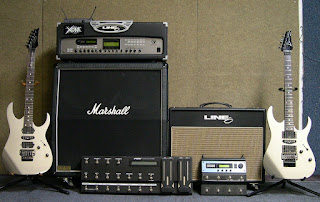 Why do I love my Ibanez RG1570 and RG570 guitars? Cause they play better than any SuperStrat I’ve ever played. Don’t get me wrong; I love Gibson Les Paul style guitars. But technically, I prefer the SuperStrat design for playability and achieving my overall tone. Thus after playing a Fender Stratocaster for 12 years (and a Yamaha Acoustic for the 5 years before that), I, Will Austin, began a guitar search for a new, performance guitar in 2002.

I loved my Fender Stratocaster. But, see, I was a Metal player, and even though many of my guitar heroes such as Dave Murray of Iron Maiden and Glenn Tipton of Judas Priest, used Stratocaster to get their Classic Metal sound, I needed a modern tone. Typically, Jackson Guitars were at the top of my list. I also considered a custom Strat. Guys like James Hetfield of Metallica, Dave Mustaine of Megadeth, and even Randy Rhoads of Ozzy used Jackson guitars. They provided the classic Metal tone that we were all used to.
I had played a Charvel years earlier, and had loved it, playing stuff like White Zombie, Metallica, and Priest. It was truly a shredding guitar. Thus, I fully intended for the new guitar to be a Jackson/Charvel. Somehow, Ibanez slipped in to this mix right near the end.
I remembered that J Yuenger of White Zombie used Ibanez and I loved his tone. Also, Steve Vai, one of the best virtuoso guitar players in the world swore by Ibanez guitars.

I went to Guitar Center at 10am on a Wednesday in March 2002, bringing my Digitech RP-6 Multi-Effects Pedal, and my Monster Cables. I then proceeded to try the Jackson DKMG, Jackson SL-1, Jackson Randy Rhoads, Fender American Stratocaster, Ibanez S-Series, and Ibanez RG-Series guitars. I was looking for the guitar with the best playability and tone with my current rig. I plugged my RP-6 into a Marshall 100W head and 1960A 4x12 cab similar to my own rig. I spent 7 hours in GC trying guitars thru my rig. I really thought I would walk out of there with a Jackson SL-1. I left with the Ibanez RG570, and saved a couple hundred bucks. I really love this guitar. I’ve played many shows with it. It’s rock solid, and the V8 bridge pickup sounds great to me. The Wizard I neck is thin and easy to wrap my big hands around. The fretboard is spaced perfectly for fast neck runs.

In 2003, I bought a Line 6 Vetta I HD and it’s floor controller the FBV.
My tone was totally redefined for the better, and my Ibanez RG570 sounded more toneful than ever, just as XONE was really taking shape in terms of vision and material…