You know what they don’t make? Floorboards for musicians that are big enough to accommodate today’s larger effects/guitar foot controllers for musicians who do double-duty in their bands by playing and singing. Setting up the gear for both a band player and a singer is a job for two persons already. When you play and sing, you do both setups. Adding new gear to this large setup requires simplification of the floor controller area into a single manageable entity. Like I said, they don’t make such a thing. You must create it yourself.

We get about 10 minutes to set up in Los Angeles area clubs. I realized that if I was going to add any new gear to my live rig, I would have to account for the setup fitting into the 10-minute limit. Otherwise, you’ll be playing a 3-song set between setup and breakdown. I recently added the TC Helicon VoiceLive, Behringer Shark Feedback Destroyer, and AKG Guitar Bug Wireless to my rig.

My setup was already pretty complex
since I am the guitarist and singer for my band, XONE.
I knew that I would have to create a custom floorboard to mount all my new gear on, as well as, my current Line 6 FBV Floor Controller. So I went to Home Depot (hardware store)
and built myself a custom floorboard after walking the aisles for
3 hours searching for the right parts. I used a conglomeration
of bathroom hardware and fence hardware to create something
that just doesn't exist - a custom floorboard for multiple, large pedals.

I basically took some 3/4 inch plywood and cut a 44.5 inch long by 19 inch wide piece that I painted Black. The first pic shows an overview of the entire board. It shows the VL, Behringer Shark, Line 6 FBV Guitar Foot Controller, AKG Wireless Receiver, Belkin Surge Protector, and assorted AC Power wall warts for the different components. I used two bathroom towel holders, with the bottom hooks Dremeled off, to create separate cleats to wrap my extension cord and Mic cable around for easy transport. Tie Wraps tied to small, metal L brackets keep everything in place. I can turn the whole floorboard upside down and nothing falls off or dangles
It also includes 2 handles so I can carry the floorboard
like a surfboard under my arm.

The second pic shows a closer view of the VoiceLive area with the VoiceLive and Shark next to each other. I've used simple bathroom clothes hangers wrapped in gaffer's tape to keep the VoiceLive's front edge in place, but still allow me to step on the switches.

The third pic is a close overview of the VoiceLive's area.
It shows the L brackets used to keep the VL in place at the rear
using Tie Wraps.

The fourth pic shows a side view of the entire Custom Floorboard.

The fifth pic shows the VoiceLive pulled back a bit from the clothes hooks used to keep the VL's front edge in place.

Hopefully these pictures illustrate how one can simplify a complex Stomp Setup into an easily manageable system for live setup. 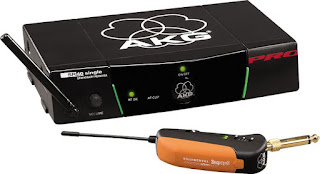 I’ve long coveted both wireless for my Guitar and wireless for my Vocals. To be able to jump off the stage and play amongst people is a very interesting concept to me. The only way that I (Will) can do it in XONE, is if I have wireless for both since I play guitar and sing. This idea has led me into a three-year hunt for wireless products adaptable to my particular situation and needs.

I took my first step into wireless in 2005, when I purchased the Shure PG14 Guitar wireless system. My friend Brian got me a great deal at Guitar Center. Over a two-month period, I attempted to integrate the PG14 into my current rig of (Ibanez RG1570>Line 6 Vetta HD>Marshall 1960A cab). It didn’t work. The PG14 took all the “life” out of my killer custom Vetta patches. A friend at the Institute Of Noise Vetta Forum had the same problem with his PG14.

Obviously, the PG14 wouldn’t work for guitar, but I found out that I could get a nice Headworn Condenser mic for my PG14, since the UT14 UHF Shure Receiver was the same for vocals. The condenser mic was awesome and totally transformed my ability to play guitar, stomp-switch patches on my Vetta FBV floorboard, and hold long notes in certain parts. I didn’t have to stand in front of a mic stand to play and sing anymore. I was sold! We played a bunch of shows with that rig and I never got interference once on my headset.

I still never gave up on getting wireless for the guitar, but I had already put together a very large stage setup for myself with my two Ibanez RGs, Vetta HD, Marshall 1960A cab, FBV Footcontroller, Shure Headset Mic and receiver, Behringer Shark Feedback Destroyer, and TC Helicon VoiceLive Vocal effects processor. Adding to this complex setup isn’t easy. I had to build a custom floorboard to mount my FBV, Shark, and VoiceLive on so that they took way less time to setup at a show. I loved my sound, but I had created a massive gear setup issue.

Recently, I was given two college graduation gifts. I had wanted a Ferrari, but what musician needs that? You can’t use it in your live rig! So I got a newer Shure WCM16 Headworn Mic that has a HyperCardioid, Unidirectional Condenser Microphone in it. It will allow less noise bleed through my mic ( and the VL).

And I got an AKG WMS 40 Guitar BUG wireless guitar system.
The Bug is this tiny little transmitter that connect to both Gibson-style and Fender-style guitar input jacks and allows complete wireless freedom. I’m going to mount the receiver on a new custom floorboard that I’m building today to accommodate all my pedals and allow easy setup at shows.

I’m now completely wireless. Expect me to be standing next you during my next live solo…